Deborah, a friendly tourist from New Zealand, was in synch with American modernism at the Whitney Museum exhibit, “Stuart Davis: In Full Swing.” Pictured here before Davis’s “Egg Beater No. 2” (1928), she looks like she’s stepped out of the painting. She seemed pleased when I pointed out the resemblance between her dress and the abstract work.

I’m reminded of the adage Life Imitates Art from a dialogue by Oscar Wilde, “The Decay of Lying,” where the character Vivian says:

“Life imitates art far more than art imitates life, and I feel sure that if you think seriously about it you will find that it is true. Life holds the mirror up to art…”

Hmmmm. Be the mirror?

In this exhibit, there are 100 Davis works to try on! Comment here and let us know how it feels.

Why did Davis paint a series of Egg Beater paintings? As the Whitney states, he liked to  show, “….the wonder and joy that can be derived from the color and spatial relationships of everyday things.” I actually like Davis best for his simple and colorful geometric depictions of places like Paris and New York. Some of these are on exhibit as well through 9/25/16.

(In this blog I hope to have a conversation about the REACTIONS of VIEWERS LIKE YOU to art, including works you choose. So please react here and send me some of your favorite or least favorite art with a brief note in the comment.) Thanks.

At MoMA until August 28th, Bouchra Khalili’s “The Mapping Journey Project” tells the story of eight individuals who journey within the Mediterranean basin looking for jobs, homes and safety. As they trace on maps, Khalili’s protagonists recount perilous journeys to and from places like Khartoum, Bengazi, Ramallah, Jalalabad, Istanbul, Milan, Marseilles, and Barcelona—telling of a high risk monopoly game that, unfortunately, is real.

…..The Mediterranean Sea is fearful. The wave is so high, some of our friends they die here.
…..We stayed with people we vaguely new.
…..And I found a place to live.
…..Then I found a job.
…..So I climbed through the mountains.
…..My uncle took all my money.
…..I got arrested.

The exhibit transforms MoMA’s Marion Atrium into a hub where viewers sit on benches fitted with microphones before each of the maps.

Bouchra Khalili is a Moroccan-French artist. By her account, she is answering the question of “how to represent an illegal journey?” All the individuals had to leave their starting points but she never asked them why. She found them at transit spots, such as the ferry station in Istanbul at the Bosporus. Each story lasts 12 minutes, the time it takes to cross the Bosporos between Asia and Europe or the Strait of Gibraltar between Africa and Europe. As she says on her website and during a Rivington Place taping, she does not consider her subjects as migrants but as members of a political minority who are mapping their own “resistance” to the constraints of borders.

WHAT’S MY RISK, THAT I DO NOTHING? The United Nations High Commission for Refugees (UNHCR) counts 59.5 million people as displaced worldwide, including 20 million refugees of whom half are children and 10 million people who are “stateless” like Khalili’s interviewees. WHAT IS YOUR RISK? PLEASE SHARE. 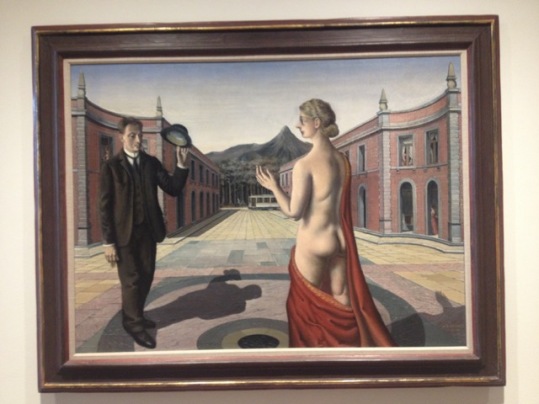 I couldn’t resist this connection between works of art. Paul Delvaux’s fascinating painting above, Le Salut, on view at Maine’s  Portland Museum of Art (www.portlandmuseum.org), presents a riskier clothing challenge than one highlighted so humorously by Wife of Bath at her “Picnic at the Cathedral” blog. Link to her annotation of the fresco cycle, Legend of the True Cross, by Renaissance wonder Piero della Francesco. Check out the workers who carry the cross. Almost 500 years later, the work by Delvaux, a fine 20th century Belgian painter, bears (or should I say bares) a stylistic resemblance to Piero’s—in architectural detail and draped garments or failings thereof. Thanks “Picnic at the Cathedral” for reminding us of the power of the naked eye.

I asked these two viewers what they were looking for in the Fuentidueña Chapel at the Cloisters. “Birds,” they answered.

They said they spotted some birds carved into the capitals—the tops of the limestone columns— which support the three arched windows of the apse. The 12th century domed structure once belonged to the church of San Martin at Fuentidueña in Segovia, Spain, now a ruin.

The chapel at the Cloisters, the Metropolitan Museum’s outpost in northern Manhattan, is perfect for sight-seeing, music performances, and, it would seem, birding!

Do you have any take aways from the Cloisters?

Antonello da Messina’s “Virgin Annunciate” appears in a scene from “Of Gods and Men” (Des Hommes et Des Dieux). The film by Xavier Beauvois tells the story of Trappist monks at the Tibhirine monastery during Algeria’s civil war in the 1990s.

A miniature of this 15th century masterpiece (compared to Leonardo’s “Mona Lisa”) sits on the desk of the abbey’s prior, Christian de Charge, played by actor Lambert Wilson. As danger looms, he and his fellow French monks must decide whether to flee the monastery or remain to care for villagers.

I first marveled at this portrait of the Annunciate, draped in an ultramarine blue veil, during a small exhibit of Antonella’s work at the Metropolitan Museum of Art in 2006. (Refer to my post “Hail” just below.)

Time to visit the original painting at Palazzo Abetellis in Palermo, Sicily. For me, it is a stunning portrayal. What do you think?

What’s Your Favorite? Here is one of mine.

Time stills as the flat surface of the water rises inside the stone and then spills over the brim. I think theater or dance or someone chanting. It is possible to sit on a bench alone in the Japanese Art galleries of the Metropolitan Museum to enjoy this installation (best perhaps early in the day). Isamu Noguchi carved the basalt basin on Japan’s Shikoku Island, home to Ise Jingu, Shinto’s most important shrine. He sourced the white rocks from the Isuzu River near the shrine. The opening in the basin is said to suggest a Zen Buddhist enso symbol—a hand draw circle—symbolizing tranquility, the universe, and mu (the void). So, get into the mu. Let me know what you think below. And, please tell me your favorite New York Museum Story? 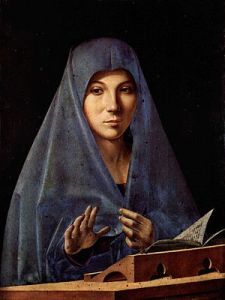 At the Metropolitan Museum of Art I watched while viewers paraded, as if in worship, before the “Virgin Annunciate” by Antonello da Messina (15th c. Sicily). I’ve never forgotten even though it was almost a decade ago. Last year, I noticed Colim Tóibín used the image on the front of his book, “The Testament of Mary.” Who is sacred? What is sacred? What is devotion?

The Art on the Wall

5th to 18th century Buddhist Art of the Himalayas (sculpture)

Picnic at the Cathedral

Cultural travel on a budget

After the Final Curtain

The latest news on WordPress.com and the WordPress community.